Carpenter ants are by far the most common wood destroying insect in our area. A large black or dark brown ant, they are easy to identify compared to their much smaller, earth-moving cousins. Although they do less damage than termites (they bore holes through wood to nest, rather than eat it), if left unchecked an infestation can do extensive damage to a home’s wood structure. Carpenter ants love wet wood, and often make their way to your home from dead wood in trees or wood piles outside. For their prevention, it’s important to get rid of dead trees near your home, trim tree limbs and shrubs away from the structure, and store firewood away from your home. Any leaks into your home that result in wet lumber are an invitation for an ant infestation, so be sure to inspect your home and fix any water infiltration immediately. [Carpenter ant home inspection NH]
Carpenter ant damage to joist & rim joist. Notice the large sawdust chunks with ant parts, called frass.

Termites can cause extensive damage because they actually feed on wood. They are small, delicate insects that live in colonies in the soil or in wood. They can not survive for long outside, so they build mud “tubes” from the soil to wood structures. Termites are social insects whose colonies are organized into castes with large “reproductives” and smaller workers and soldiers. Workers feed the colony and tend to the needs of the queen while soldiers defend the colony from invaders such as ants. These highly organized colonies allow termites to be efficient and very destructive when they attack our homes.

Carpenter bees, a large bee that resembles a bumble bee, are prevalent in the northeast. Carpenter bees occasionally construct nests in exterior structural or decorative wood such as siding, fascia boards, trim, and log homes. A round hole (~1/2″ diameter) is chewed in the wood surface then a tunnel is bored, usually at 90 degrees to the entrance. They also tend to come back and use the same tunnels year after year, and prefer to make them in the full sun, rather than shaded areas. Unfinished wood is far more susceptible to carpenter bees than finished wood, so keeping a good painted surface is your best line of defense. It’s important to repair the large holes bored by carpenter bees because water infiltration can cause more damage than the bees themselves.

Powder Post Beetles are a tiny, wood-boring insect primarily found in coastal areas, although they can be spread virtually anywhere inside lumber. They spend most of their life as wood-consuming larvae (hence the nickname “woodworm”). Unlike other wood-destroying insects, they are found to repeatedly infest the same dry wood for generations, so they have the potential to cause extensive damage. An infestation is fairly easy to treat, although harder to detect, as the larvae stay in the wood and the short-lived adult beetle bores to the surface.
Woodworm damage. 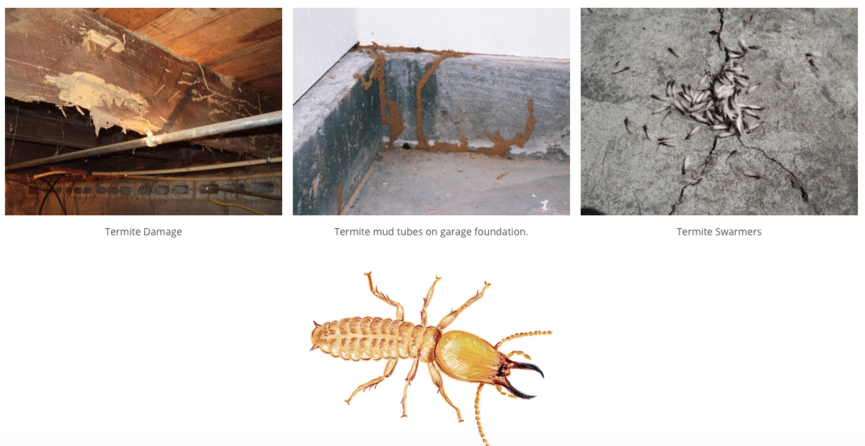